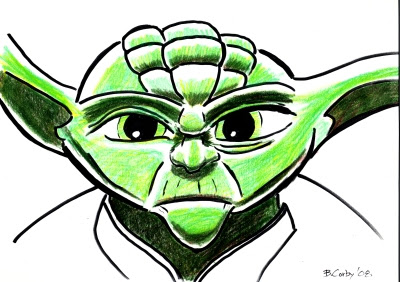 I have nothing new to show anybody since I'm wrapping up the secret project and can't show any of that so here's the first of some con sketches I've done over the last few years.  If you know me you know I don't draw other people's characters but a few years ago I was doing an Arena Con at the Arena Grand Theater while Star Wars Clone Wars was running and drew a few of these and handed them out to the kids going to the movie.  There's also a Ahsoka that is pretty terrible so you probably won't ever see that. Thanks to Victor Dandridge for organizing the the Arena Cons.  I also did one during one of the Batman movies and have a Batman sketch that is really bad.