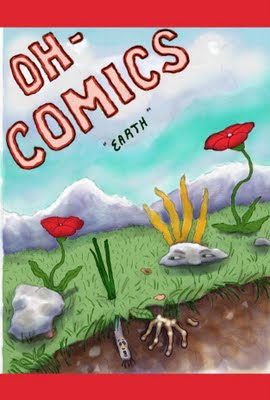 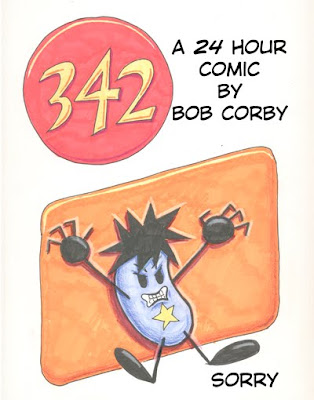 Here's a quick look at the cover of 342 my 24 hour comic. It will premiere at Genghis-Con next Saturday in Cleveland and will be available on sale here next week.
_
Posted by Bob C at 5:02 PM No comments:

The Results of the Halloween 24 Hours Comics in Columbus 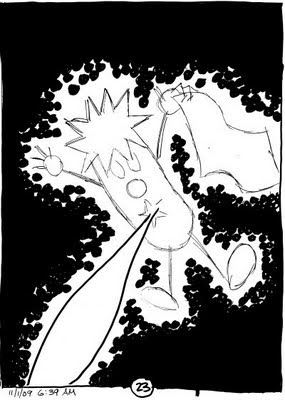 I made it! After a failed attempt back in 2004 I managed to product a 24 hour comic entitled "342" over last weekend. About eight of us started out at noon on Saturday at the Crimson Cup coffee shop in Clintonville. The group included Sunday Comix regulars, Ray Tomczak, Jon Riddle, Mike Carroll, Kira Keck and Sue Olcott, and one of my Explorer Post students, Ryan Buoni.
By 9:30 PM I was about a half hour off pace and was starting to panic knowing how my previous attempt proved I would be moving slower as time went on. Then a stork of genius and the well timed 17 minute snow storm page got me back on track. I didn't hit the wall I expected and managed to pick up time with each page and the "story" started to flow. Then by about 2 AM only the hard core 24 hour cartoonists were left Ray, Jon and me. Mike Carroll who had accomplished a 24 hour book in the past left after finishing all the pencils and was going to finish the inking at home. I found out later that he didn't finish. Ray finished at 6:35 AM. I wrapped up page 24 at 7:24 AM. I took off then to get some sleep. I found out later that Jon finished up at about 9:00 AM.
All three finished strips have characters named Derrick and employ the use of the sound effect "Hork" but other than that have nothing in common.
While my strip isn't as pretty as either Ray's or Jon's it's complete and actually is coherent and comes to a end. Well as coherent as a quest story involving different dimensions, bad poetry and packing peanuts can. (Ray's and Jon's comics are complete and coherent too.)
I'd like to thank the Crimson Cup for letting us hang out there all night and the free coffee, Canada (Kira's mom) for the goodies and the bentos she provide and to Max Ink for setting the whole thing up. Also thanks to the old and new friends who dropped by to cheer us on.
Although we had a ball the common consensus is that we're not going to do it again soon .
My strip will probably be issued as a mini-comic since I have a coupon for copies which runs out this month.
There was a video shot. I'll let everybody know when it surfaces.
_
Posted by Bob C at 3:10 PM 1 comment: